This post contains affiliate links. I’m an affiliate of several online stores, including Amazon. I may earn a commission at no extra cost to you if you use these links to purchase furnishings. Thanks! 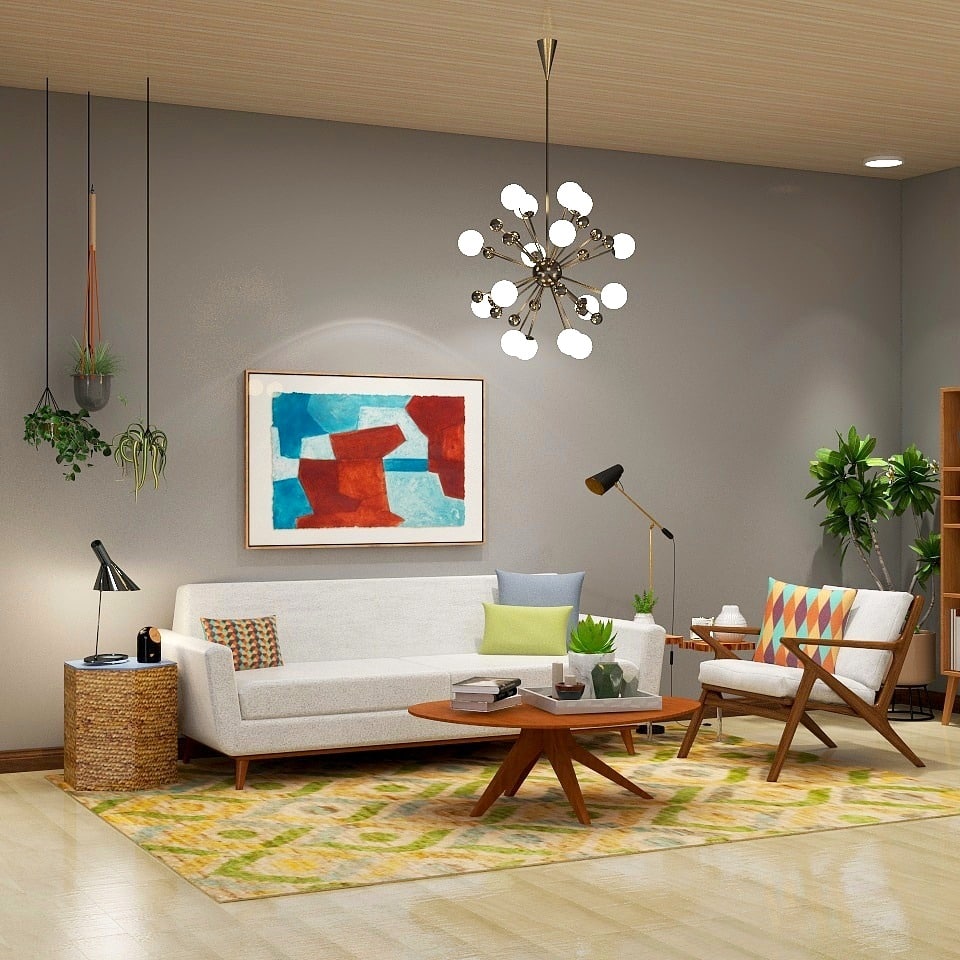 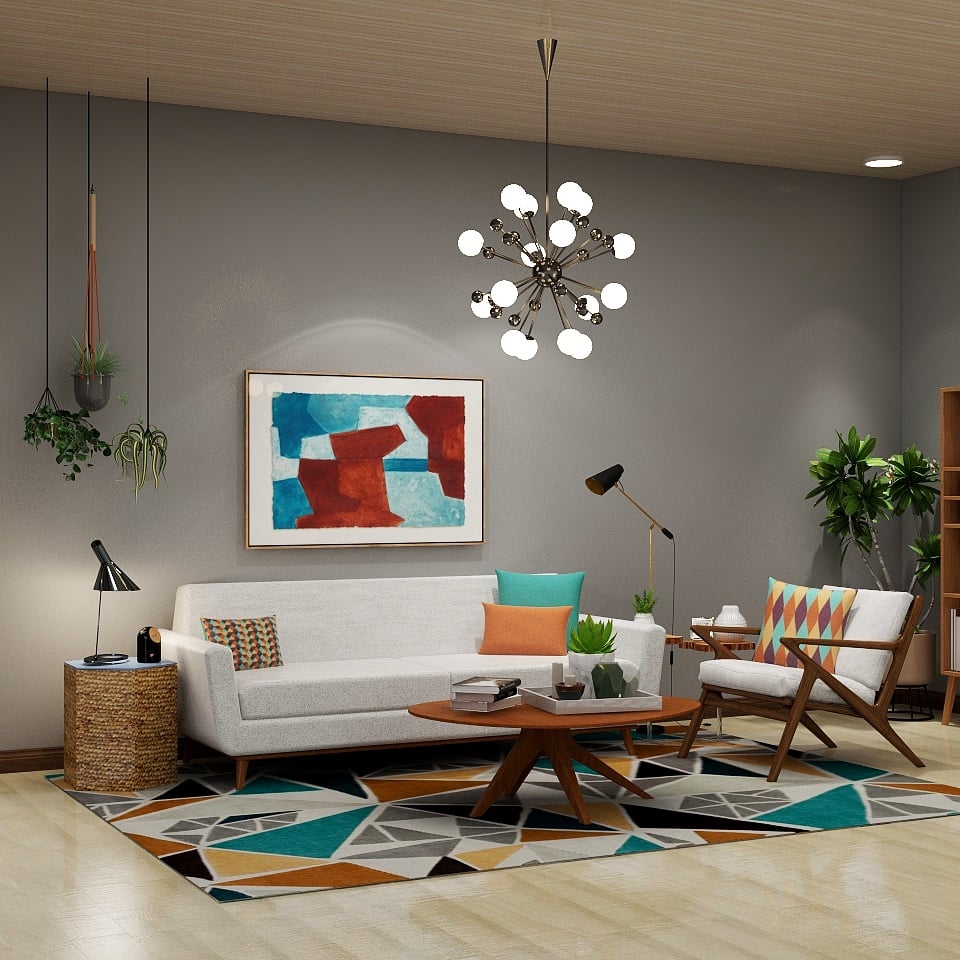 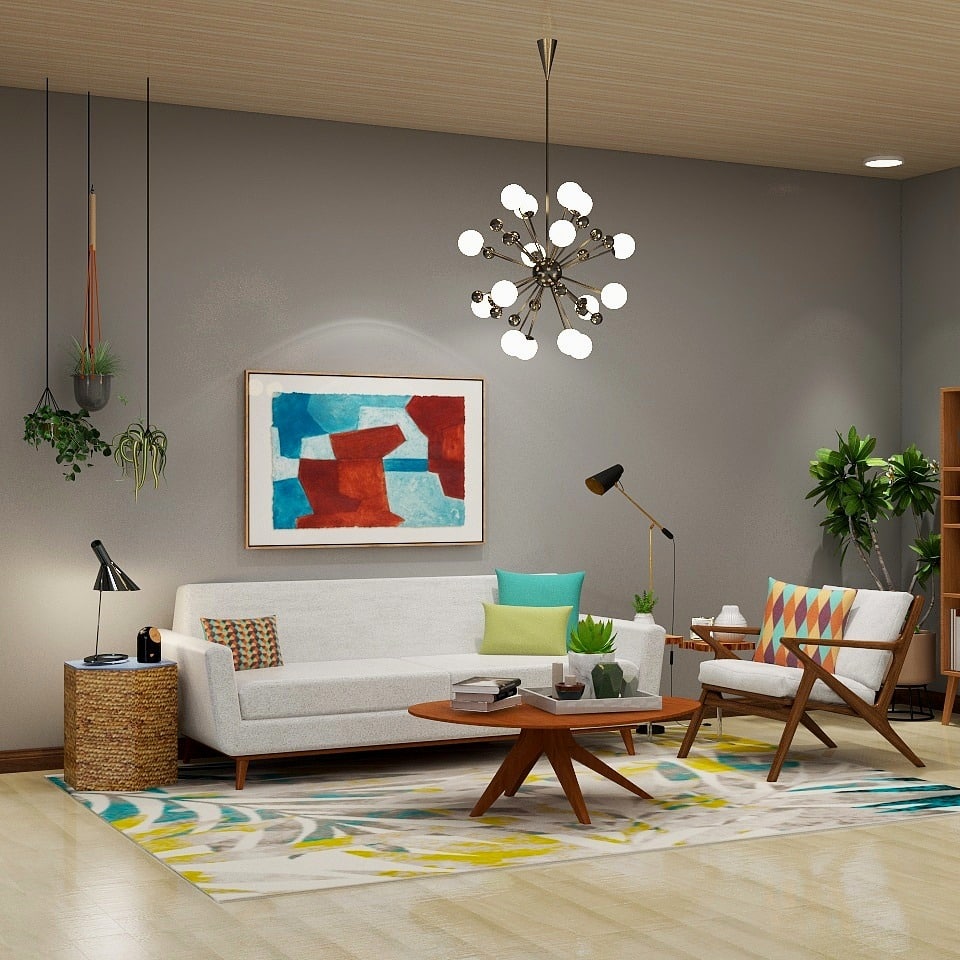 Shopping for an area rug can be confusing and overwhelming. Understandably so, because aside from the disparity on prices, there’s the question on the availability of the size you need, the colors on it, the material it’s made of, etc….

But hey, if you’re reading this, you’ve gotten past the more difficult part – that is, deciding on the style. And the winner is Mid-Century Modern or Mid-Mod – popular, nostalgic and timeless.

So what’s the perfect Mid-Century Modern area rug for your space?

Before we get to that, here’s a short backgrounder on the style. It will give more contexts to the characteristics to look for when picking your Mid-Mod rug.

Having flourished from the 1940s to the 1960s, Mid-Century Modern Style was not only influenced by the styles that came before it, like the:

·      Abstract Style (a precursor to the Modernist Styles) and of course, the

It also shared design elements with other styles that came alongside it, like the:

Another big factor that shaped Mid-Mod was the Scandinavian peoples’ migration to the US after WWII. They exchanged design principles and furniture construction techniques. That’s why we see so many similarities between Mid-Century Modern and Scandinavian interiors.

Yes, history lessons can be boring, so we’ll stop right there.

Now that we know what styles influenced Mid-Mod, we can now identify each of their contributions. Below are the characteristics and elements to look for when shopping for Mid-Century Modern area rugs. Get the gist from the collage and table below. 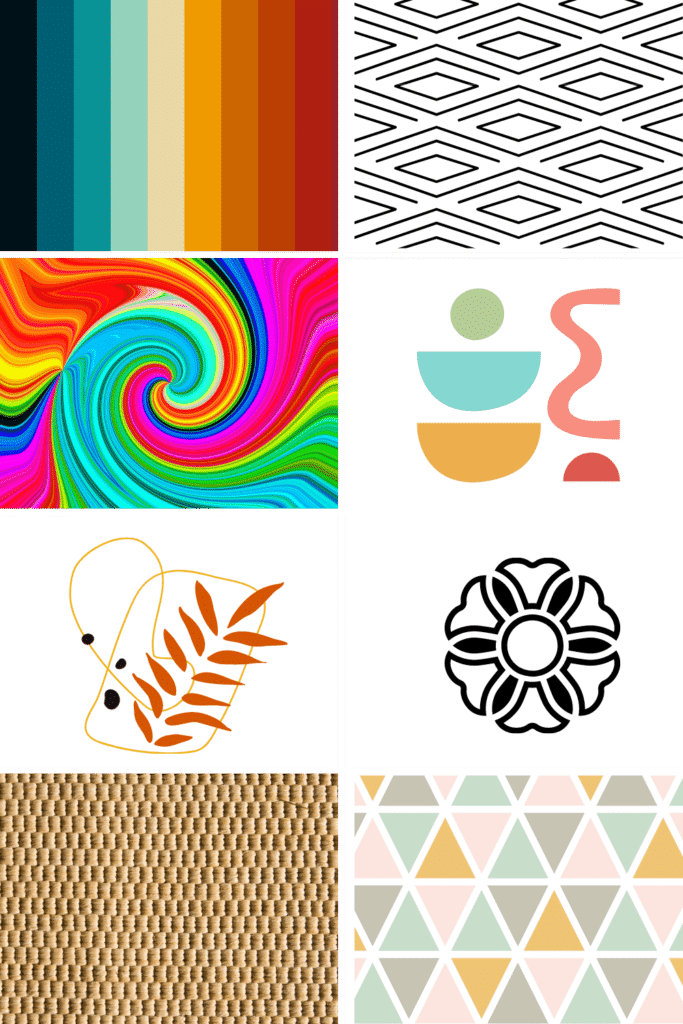 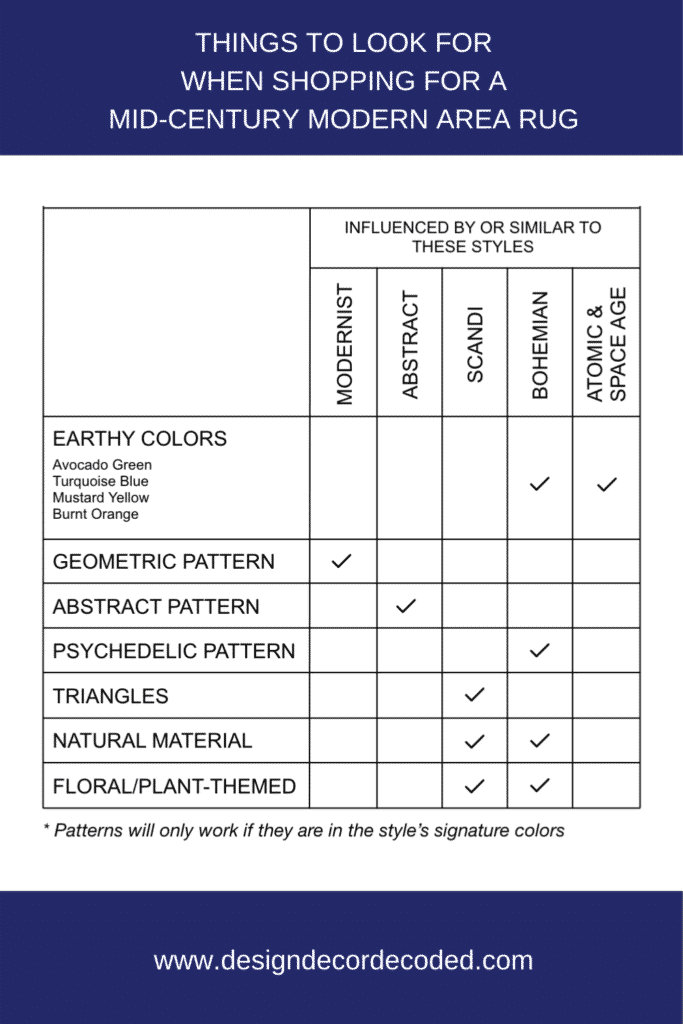 From those information, we can now draw the answer to the following question:

Mid-Century Modern area rugs are bold, colorful, and patterned. It can have any color, but the style’s signature hues are burnt orange, avocado green, turquoise blue, and mustard yellow. Patterns can be geometric, psychedelic, and even flowery. Some can be graphic, abstract, and whimsical.

Area rugs that are made of natural materials like jute, sisal, or hemp are also used in Mid-Mod, since one of the style’s characteristics is being “close to nature.”

With such diversity, no wonder that shopping for a Mid-Mod rug isn’t an easy task for some.

Let’s try to make this a little easier.

It’s show-and-tell time. Below are examples of the many looks of area rugs that would fit right in in any Mid-Century Modern space.

More on this later.

Mid-Century Modern Rug Ideas – Vintage, Neutral and Everything in Between

The area rugs in the images below are not in the size depicted in the space.  Please check the links for more info on sizes. A disclaimer on the colors: the actual colors of the physical items may not be the same as we describe it here.

Let’s use these area rugs in a Mid-Century Modern space, and see why they work.

Get a feel of which direction you’d like to take.  They may not be available for your exact need, but you can take these ideas in mind when shopping. 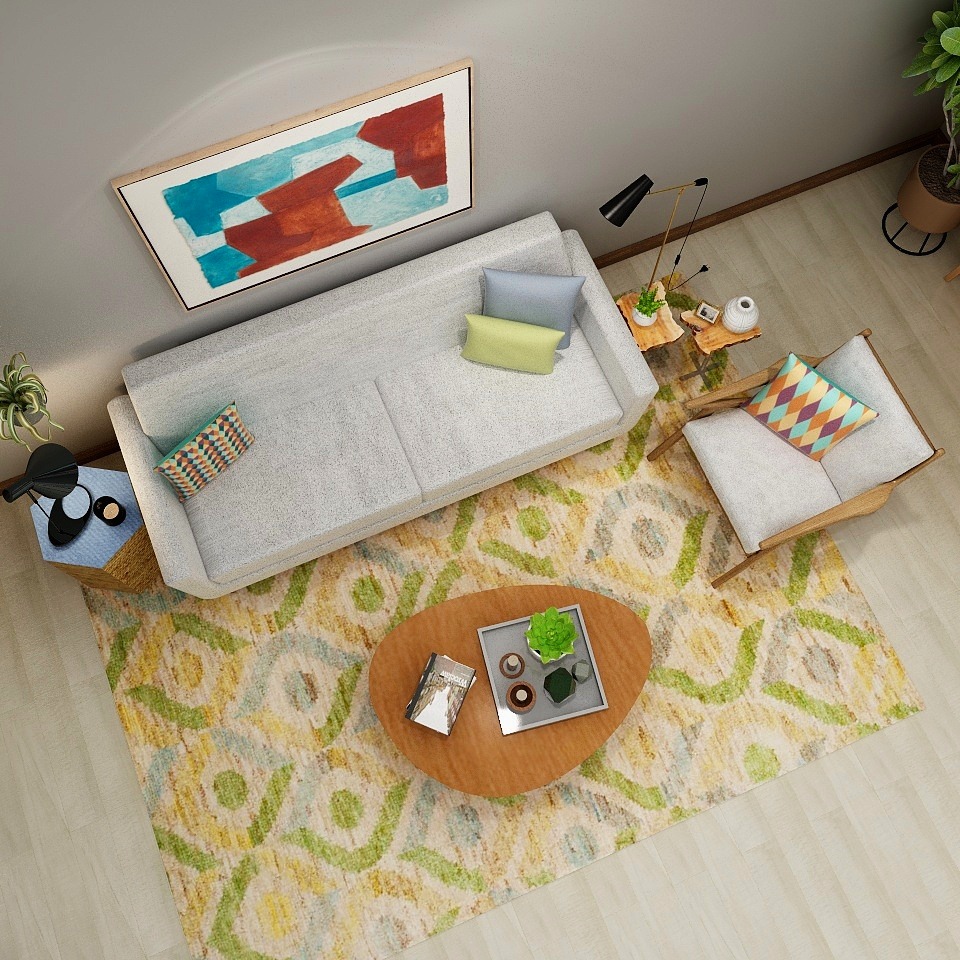 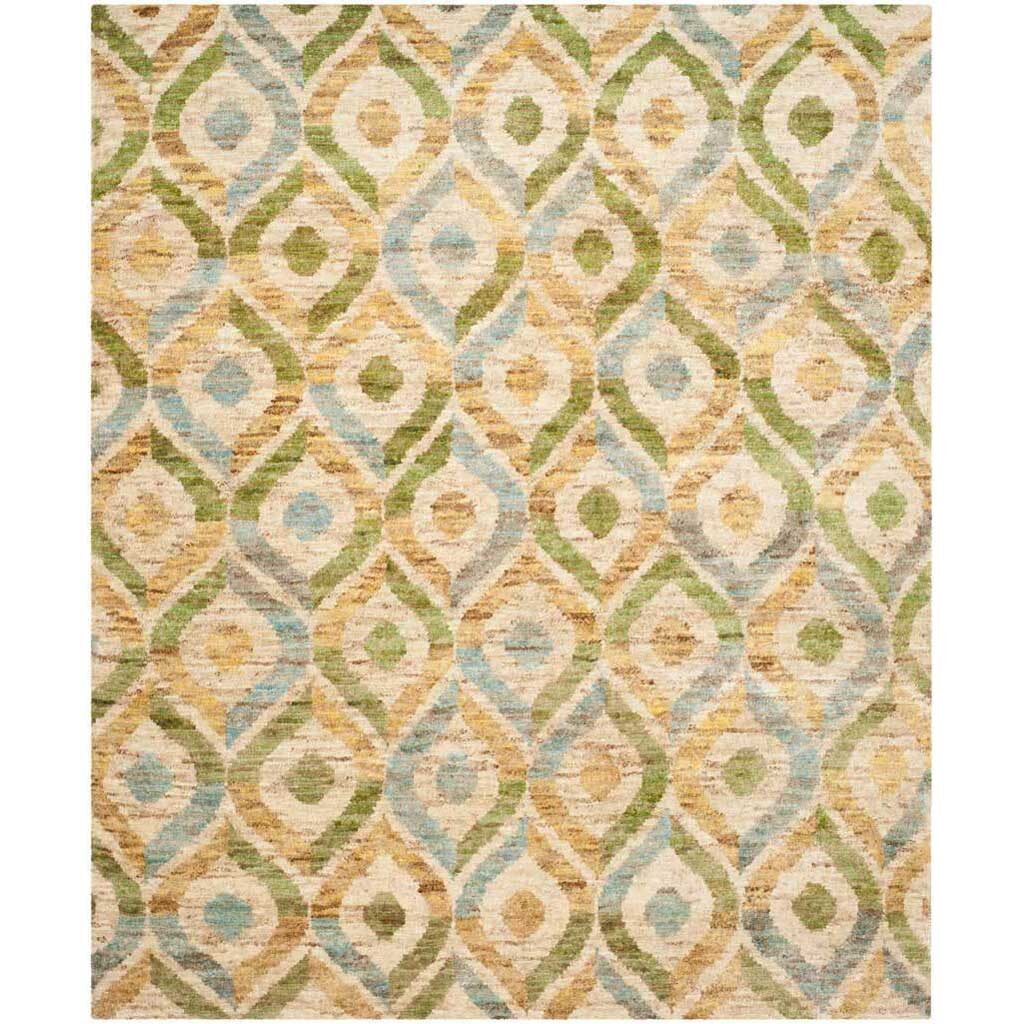 Going all-out and leaning on the bold? Not only does this piece have that graphic pattern that’s on-point with the psychedelic-retro vibe that Mid-Century Modern is known for, it also has its signature colors. 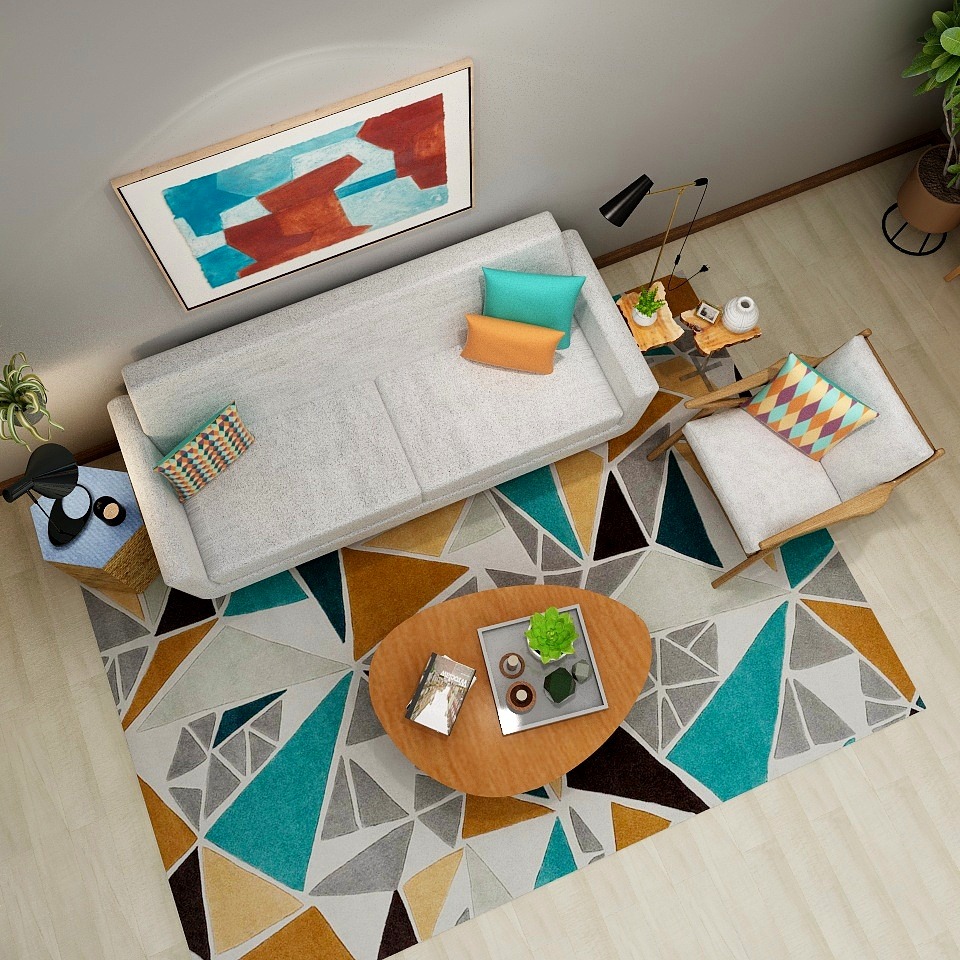 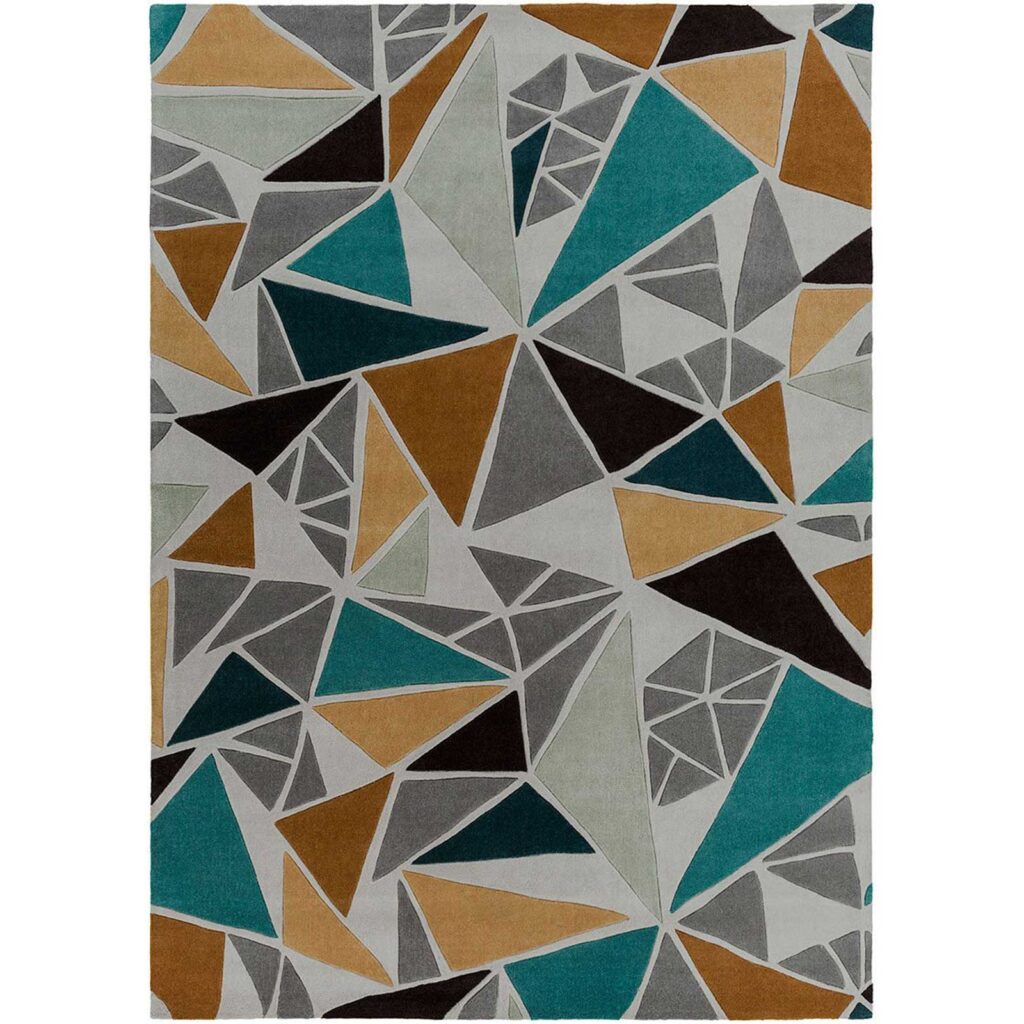 Geometric shapes in Mid-Century Modern is usual. But triangles are especially significant because it’s one of those design elements it shares with the Scandinavian Style, where triangles are stylized representation of the region’s mountain ranges.

So this area rug with the right pattern and the right colors is Mid-Mod through and through. 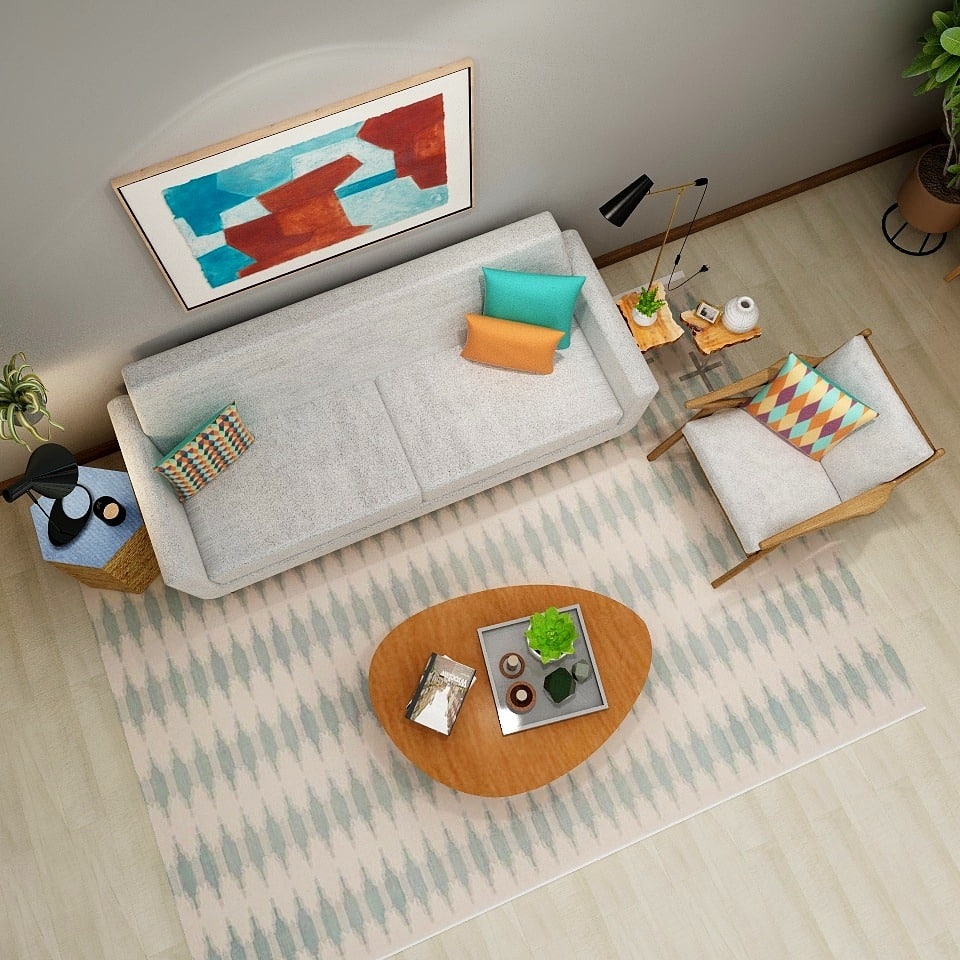 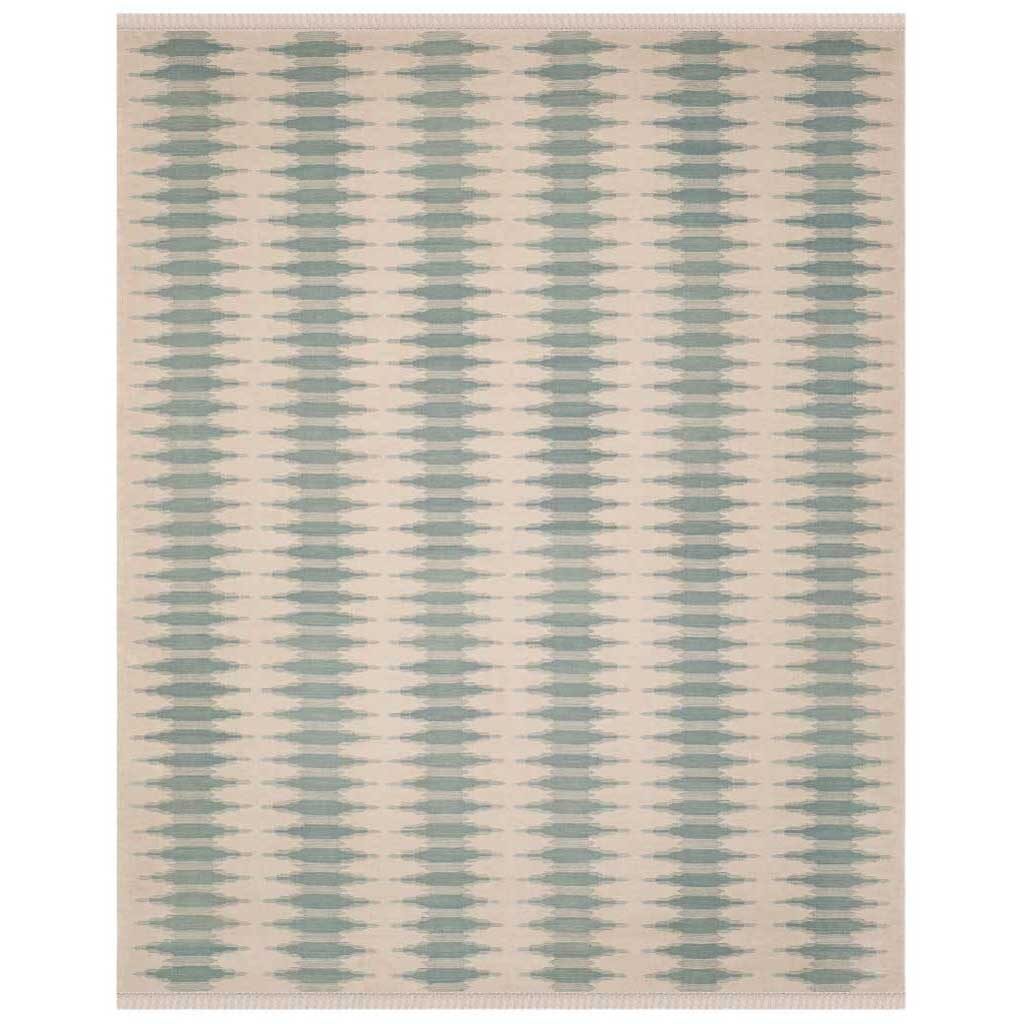 Not a fan of the bold and colorful? We’ve got you covered. While subtle, this piece has that psychedelic pattern and the blue color of the style. To make this space look unmistakably Mid-Mod, make sure to use furniture pieces and accessories of the the same style. 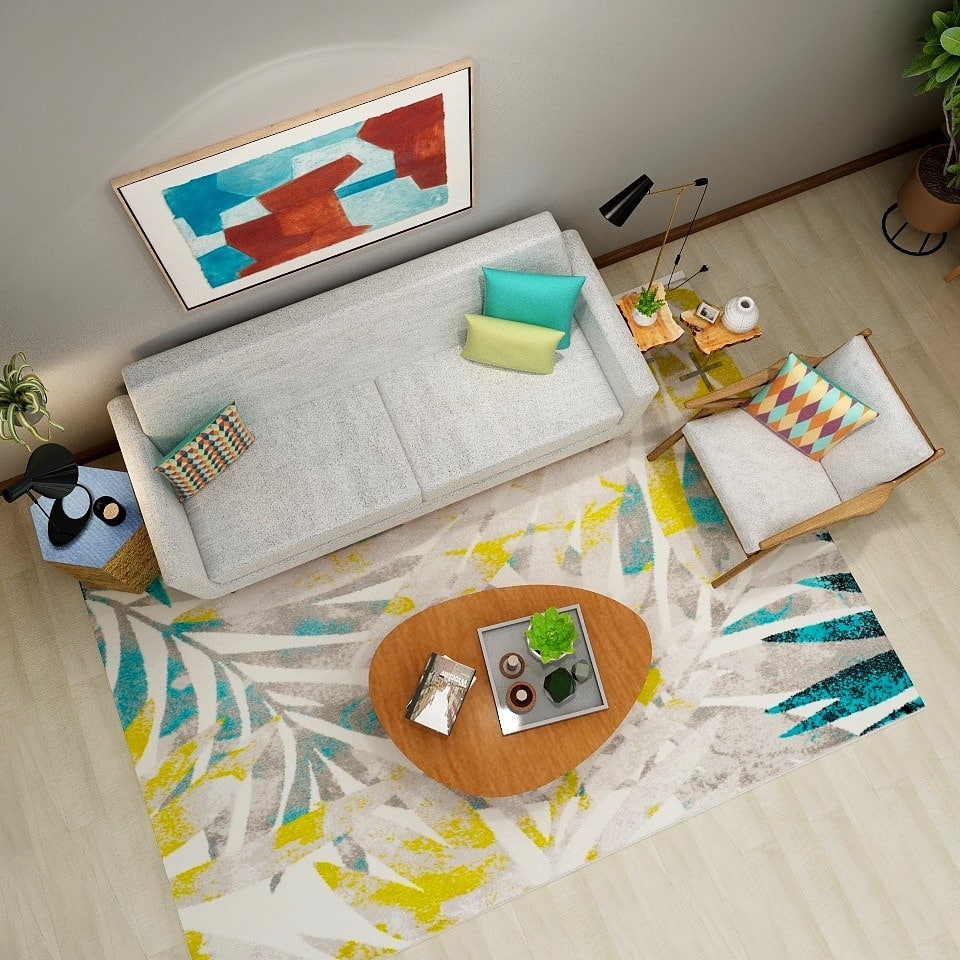 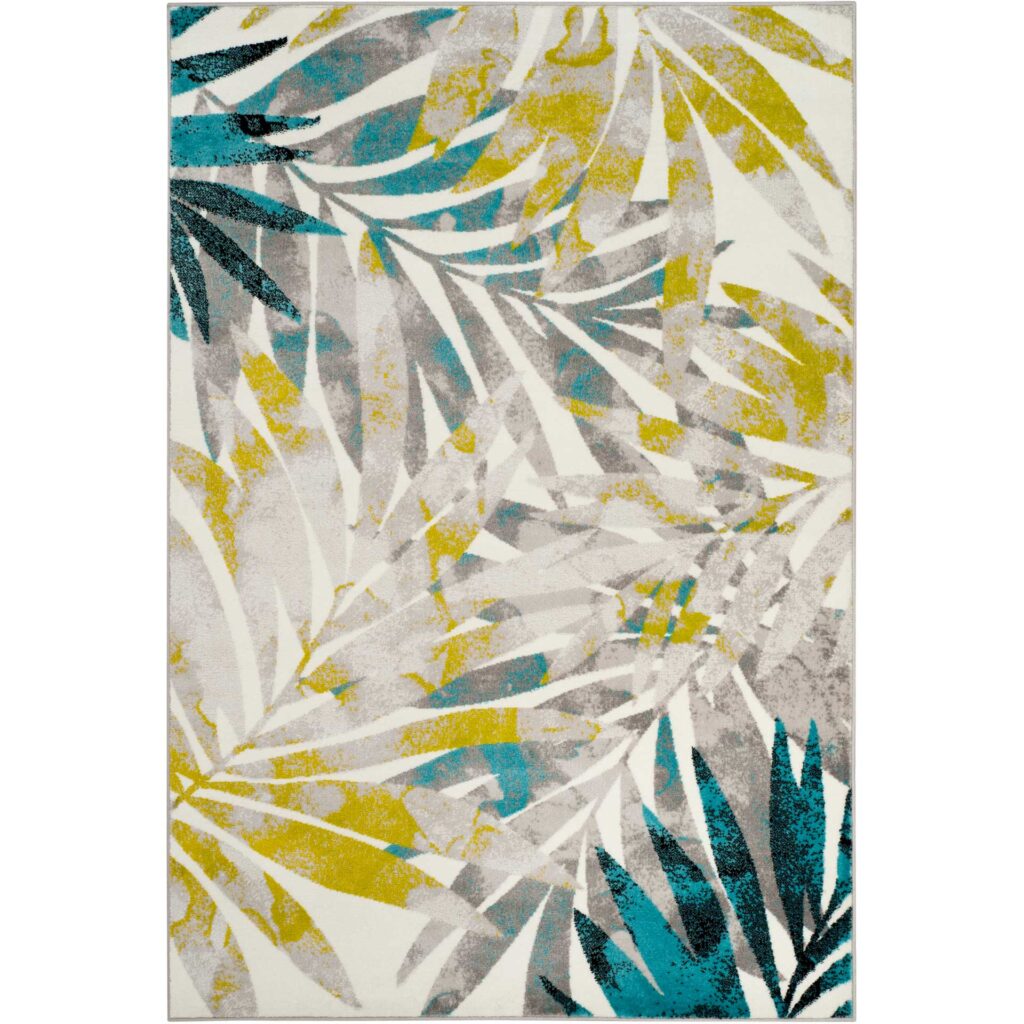 While this piece isn’t geometric in pattern, its graphic leaf design meets the close-to-nature characteristic of Mid-Century Modern Style. Real, live plants are of course the better choice for bringing the outside in. But floral- and plant-themed furnishings and accessories are always welcome. Besides, this area rug’s color combination is right for the style, albeit leaning on the modern side because of the brightness. 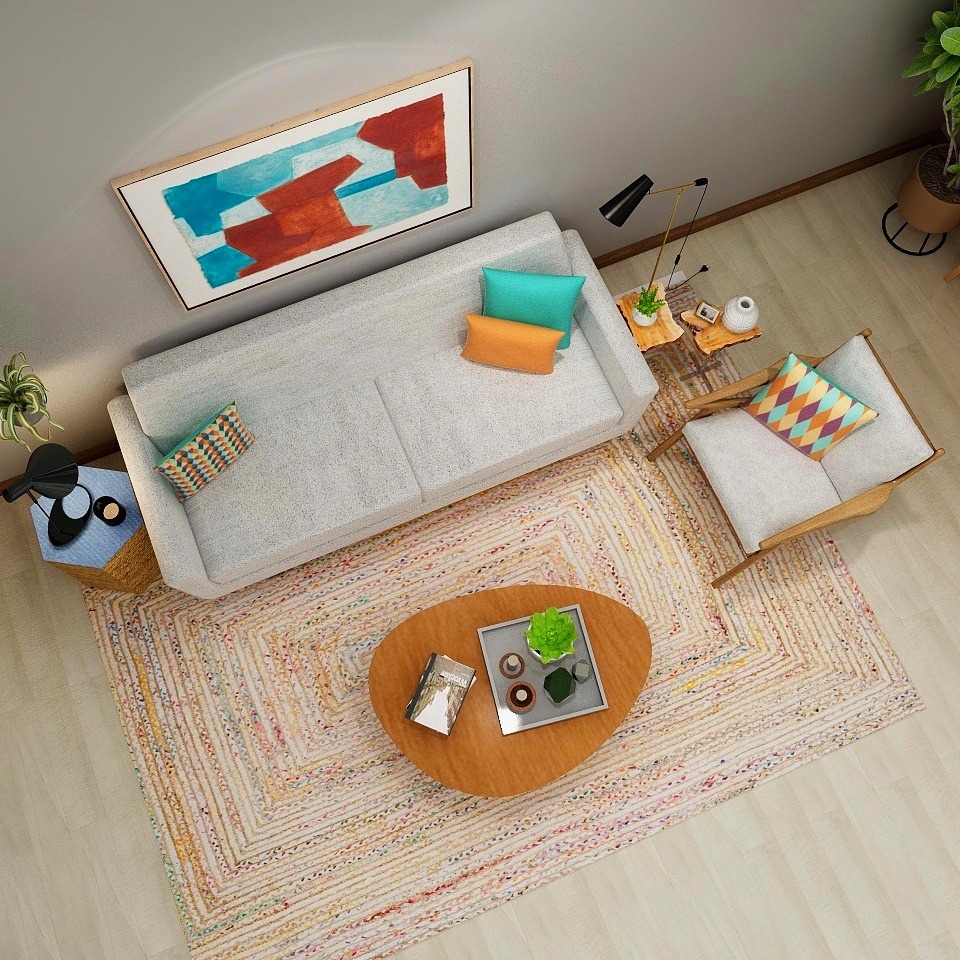 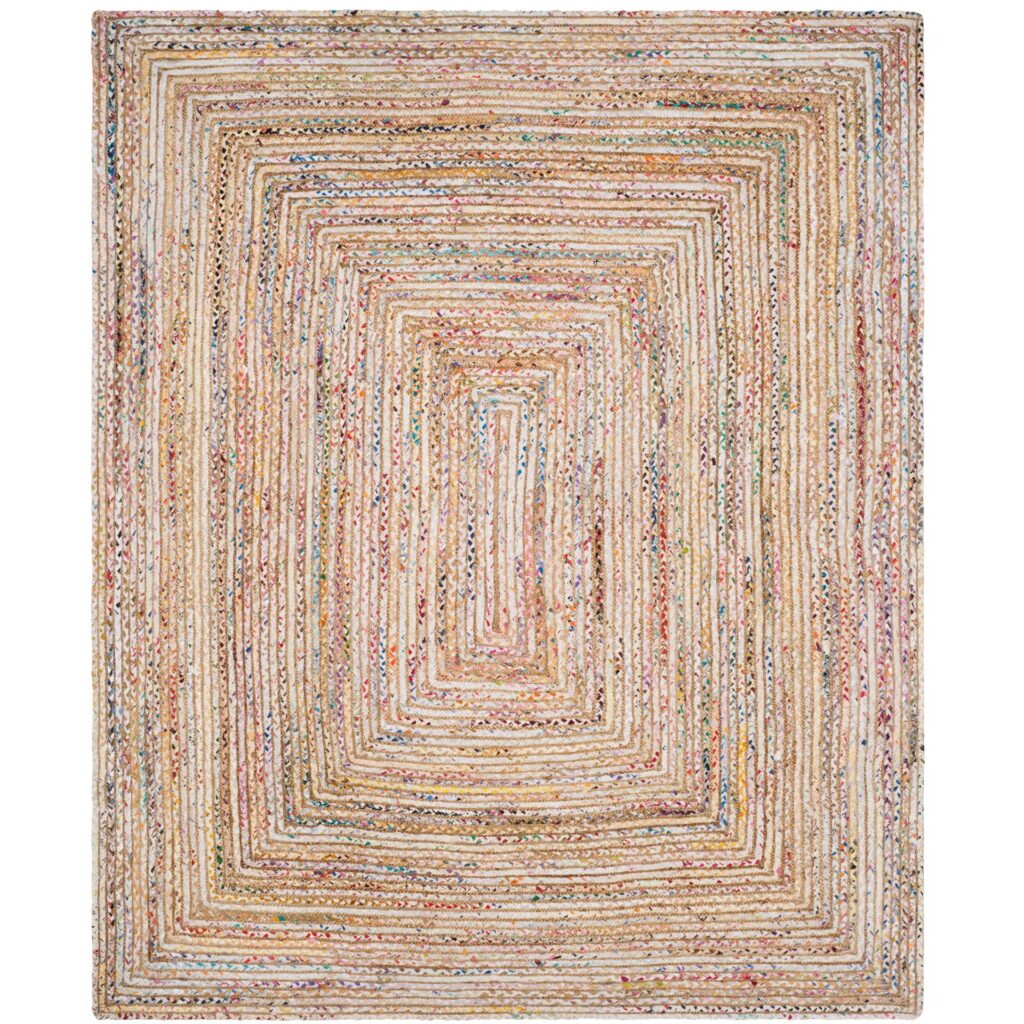 Made of natural fibers, with subtle earthy colors, and concentric rectangular pattern. These qualities may not be obvious for this piece to be considered for a Mi-Century Modern project. But this can definitely work when used in combination with the right furnishings. 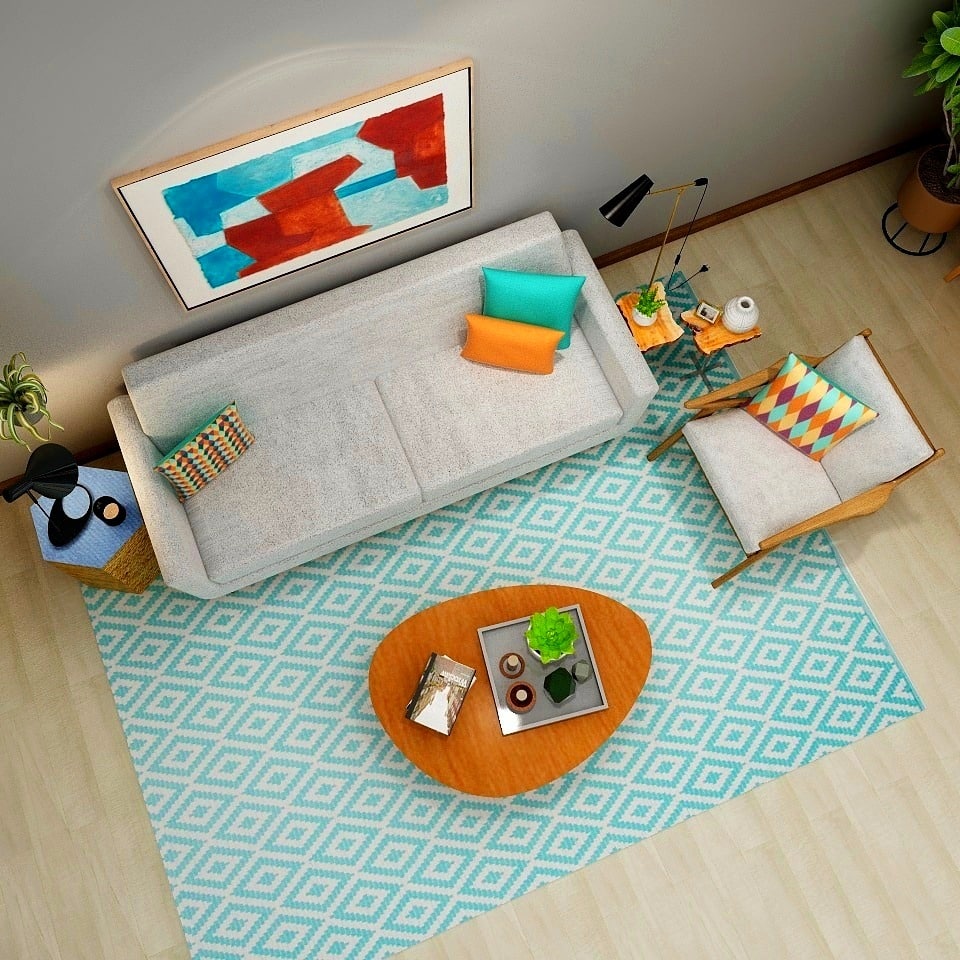 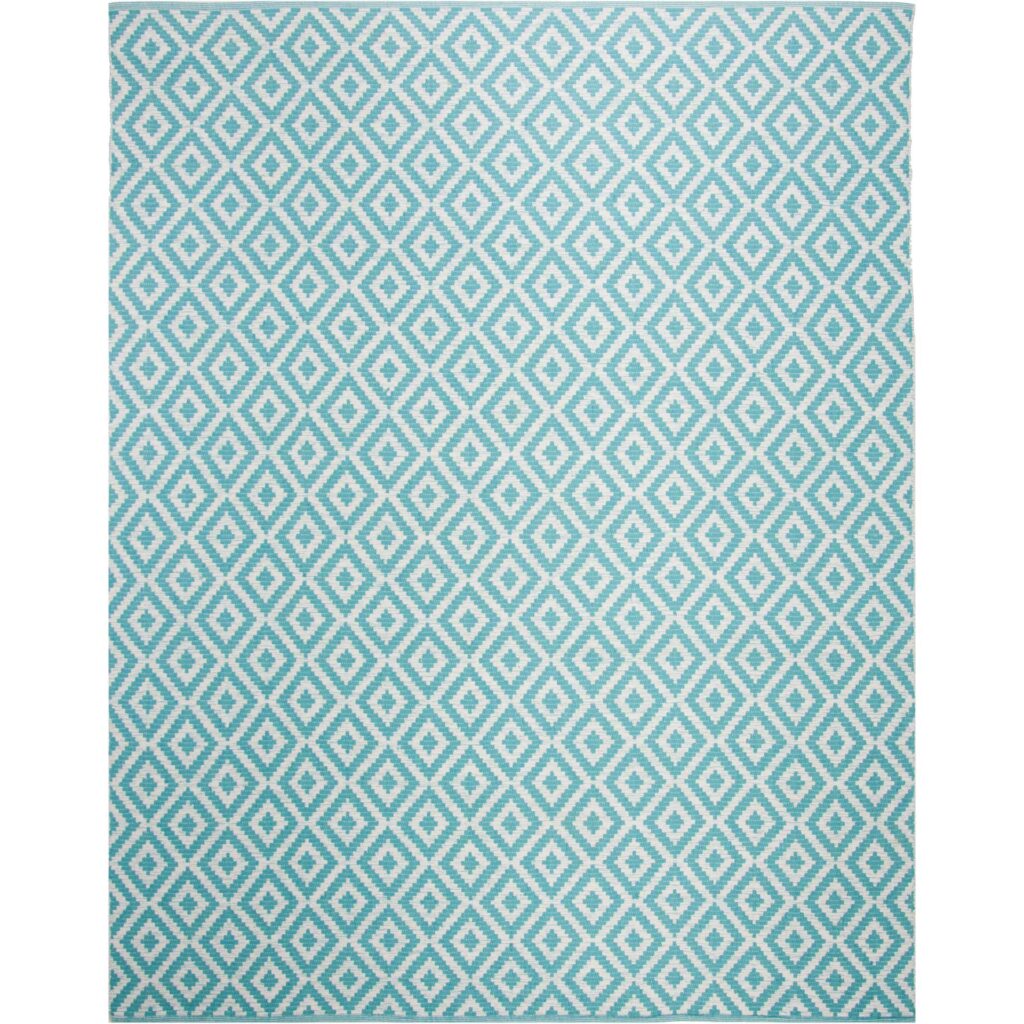 Can’t go wrong with this one. Geometric and in turquoise blue, this area rug will definitely be at home in any Mid-Century Modern space. 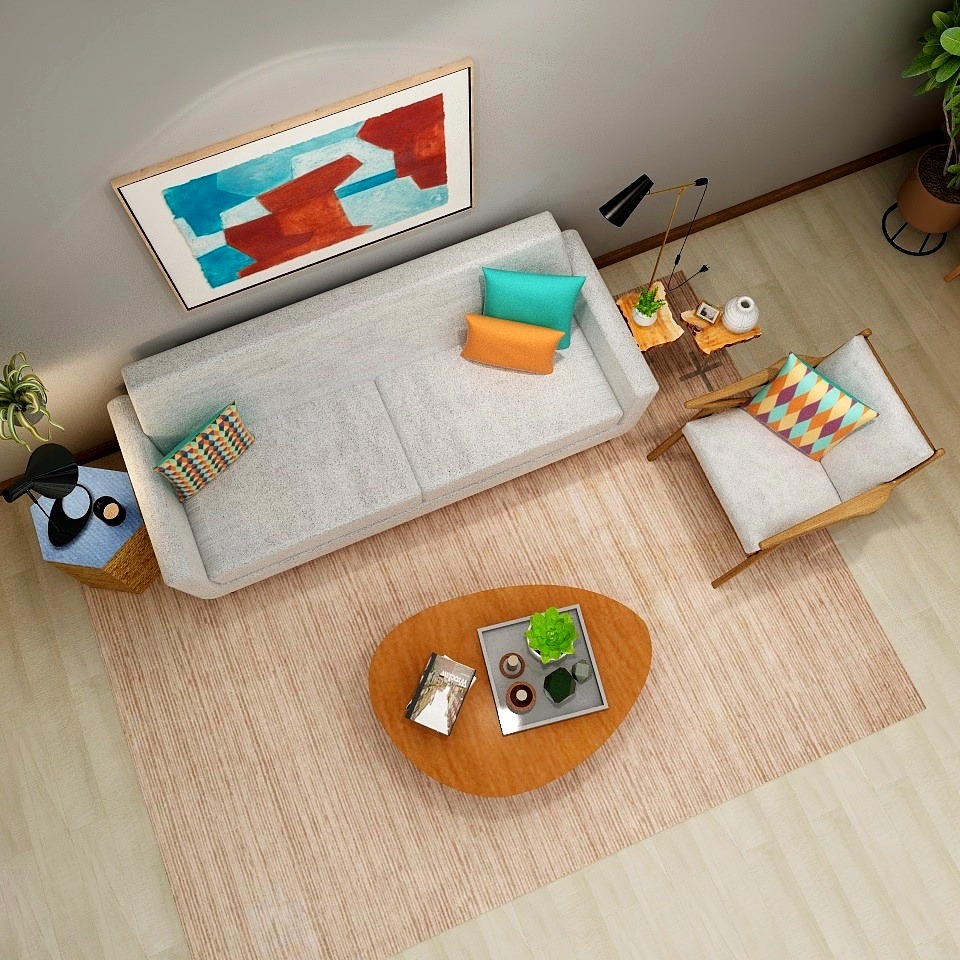 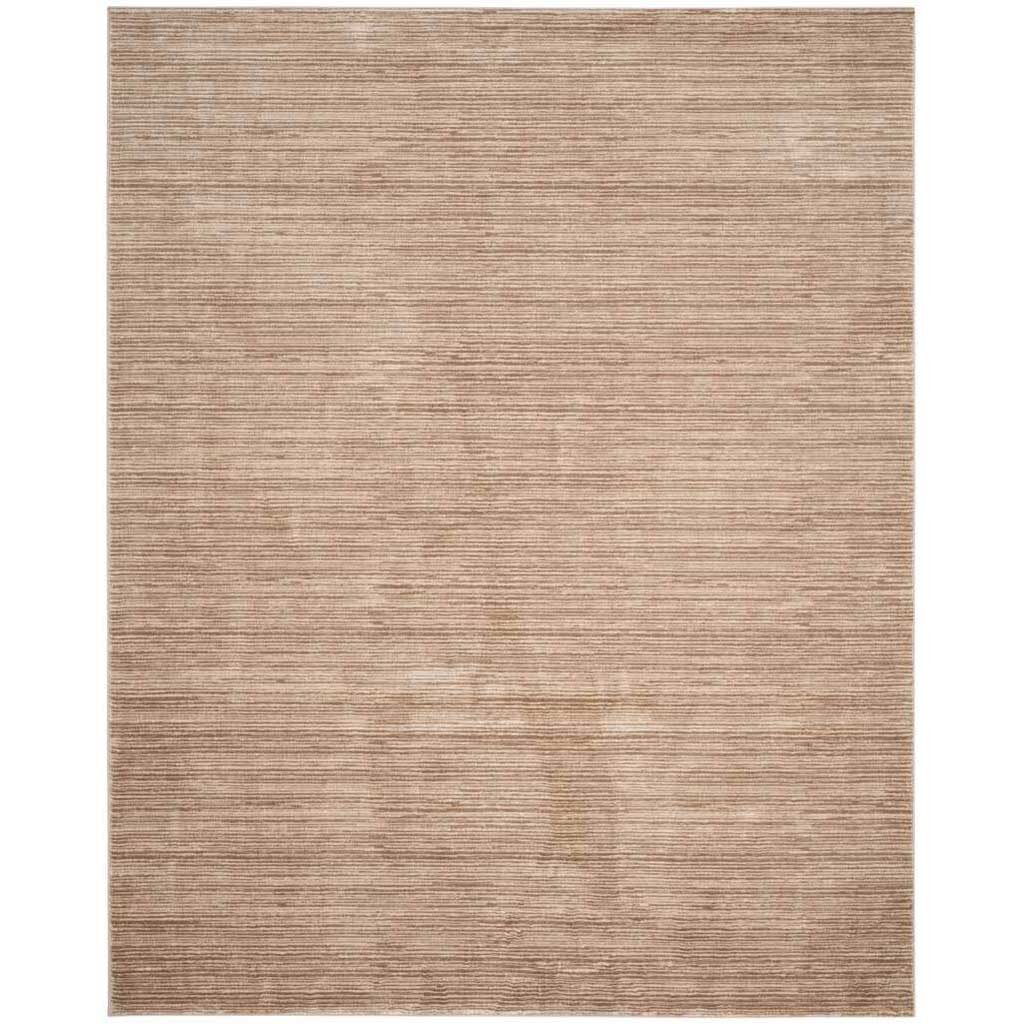 Any area rug of solid, rich, and earthy color can be right for grounding a Mid-Mod space. Like this one above. It’s made of light brown fibers that’s woven into white pile backing, making it look solid enough with streaks of white lines adding interest to it. Modern, yet the color harks back to the vintage side of the style. 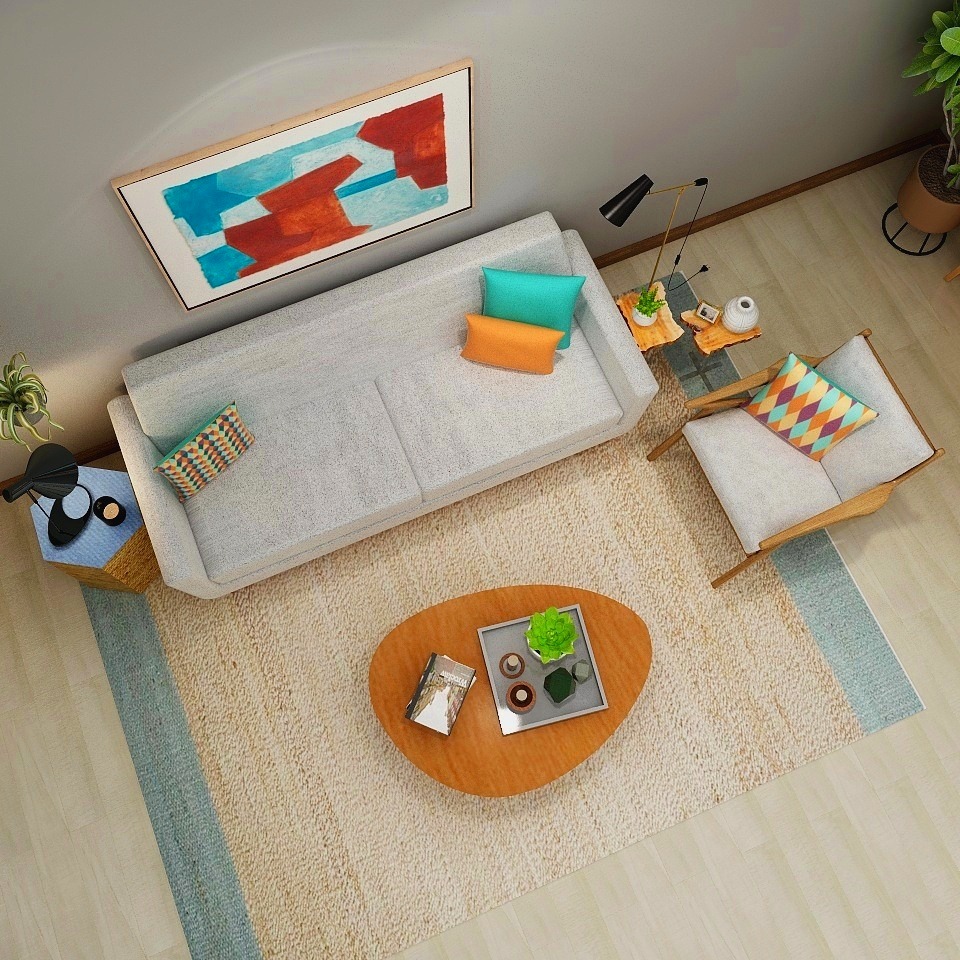 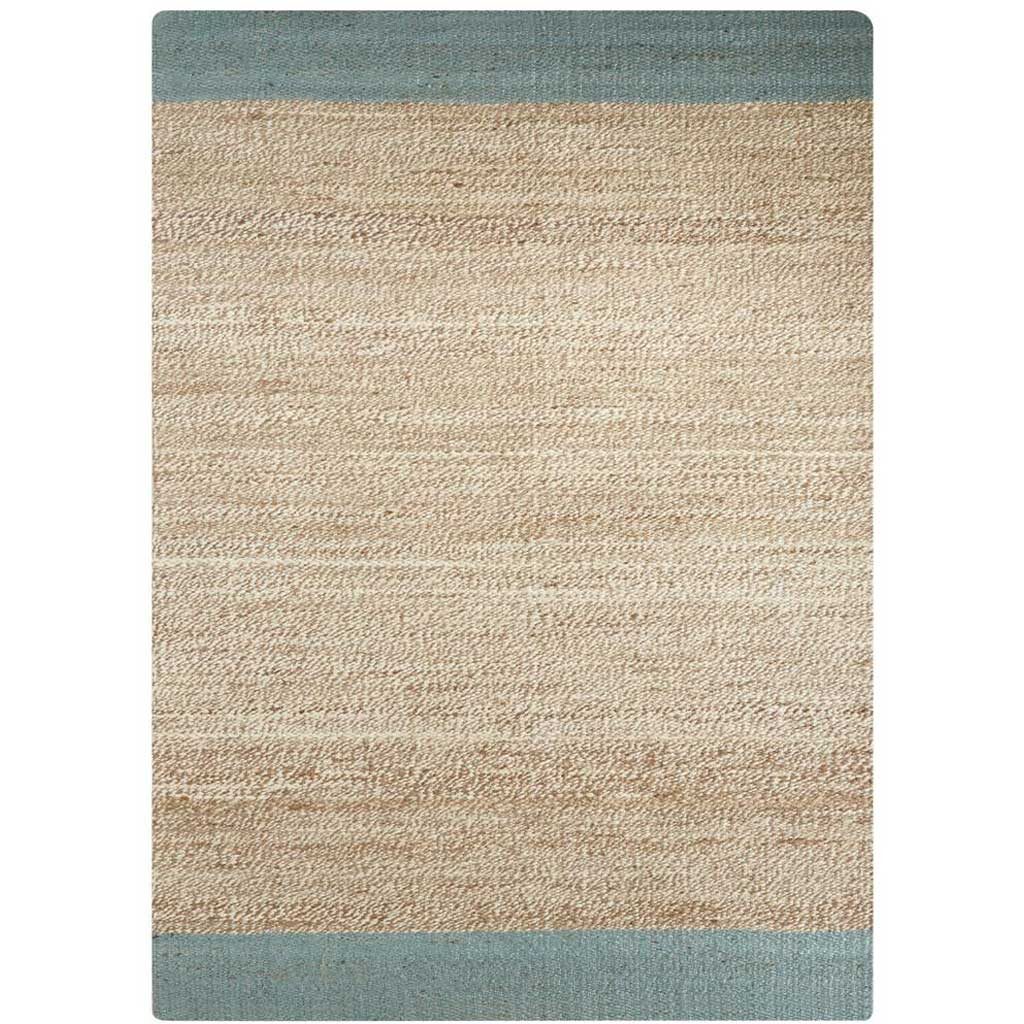 If you’re going for an updated version of Mid-Century Modern Style, this piece of area rug may just be the one you’re looking for. Made of natural fiber jute, with its two short ends dyed in turquoise blue, this item will do the job just fine. 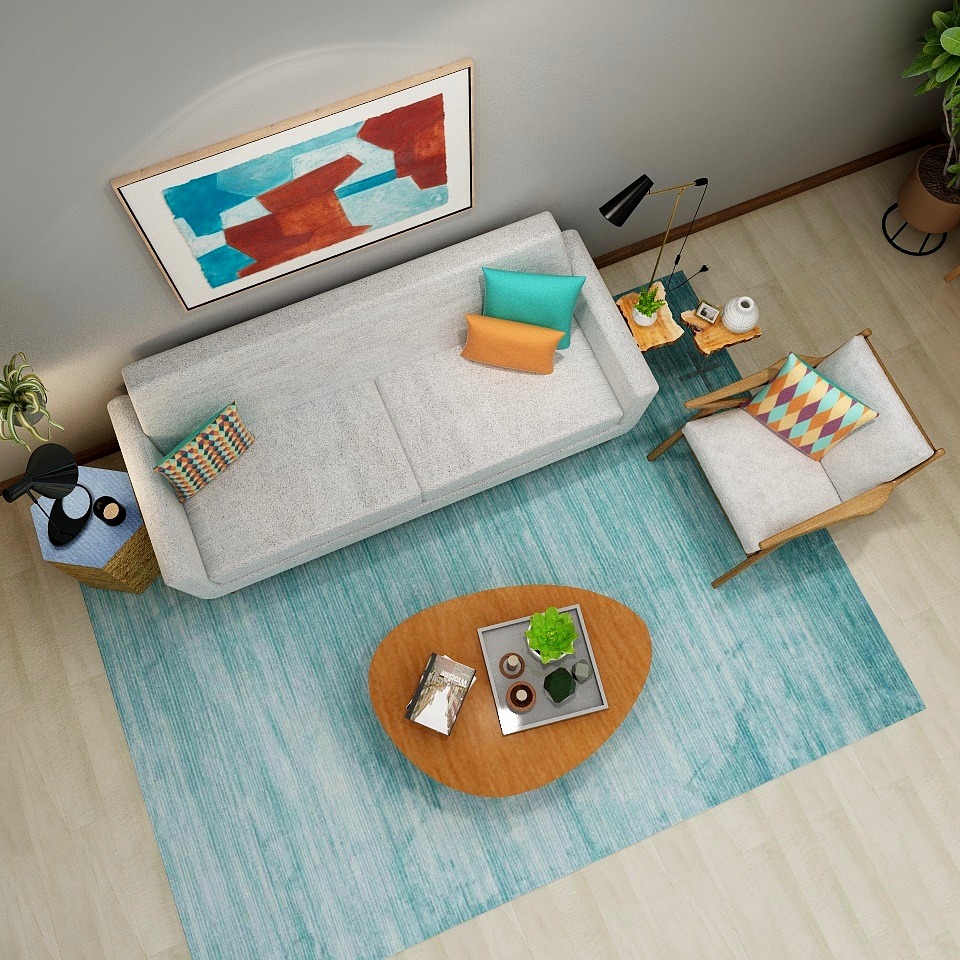 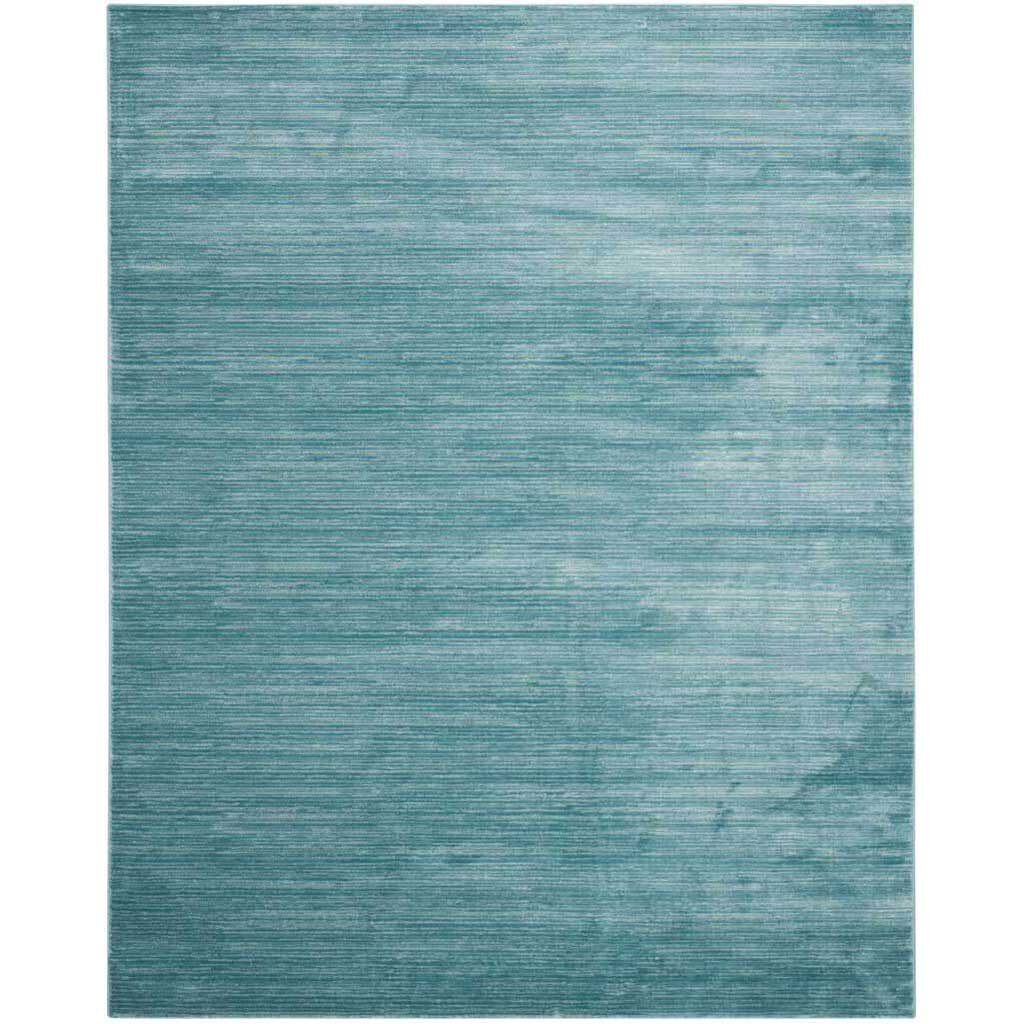 Just like the solid brown piece above, this area rug in turquoise blue and white fibers is both modern an on-point with Mid-Century Modern. 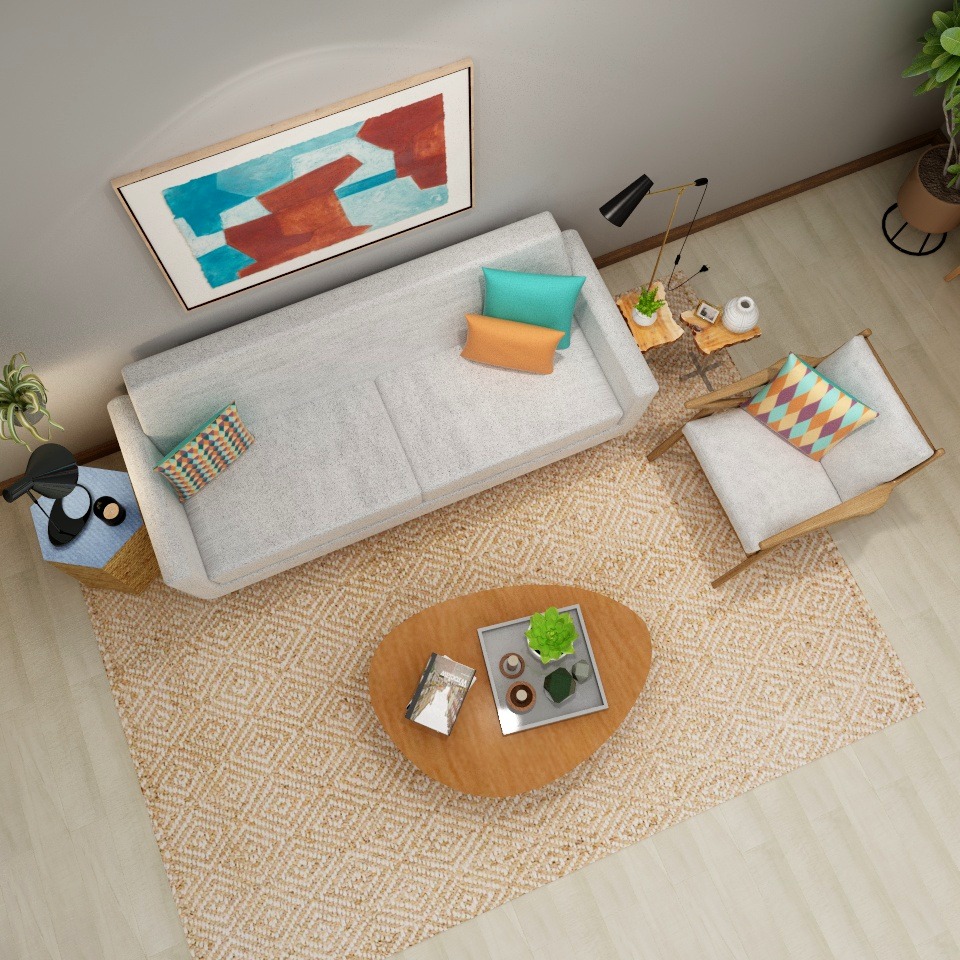 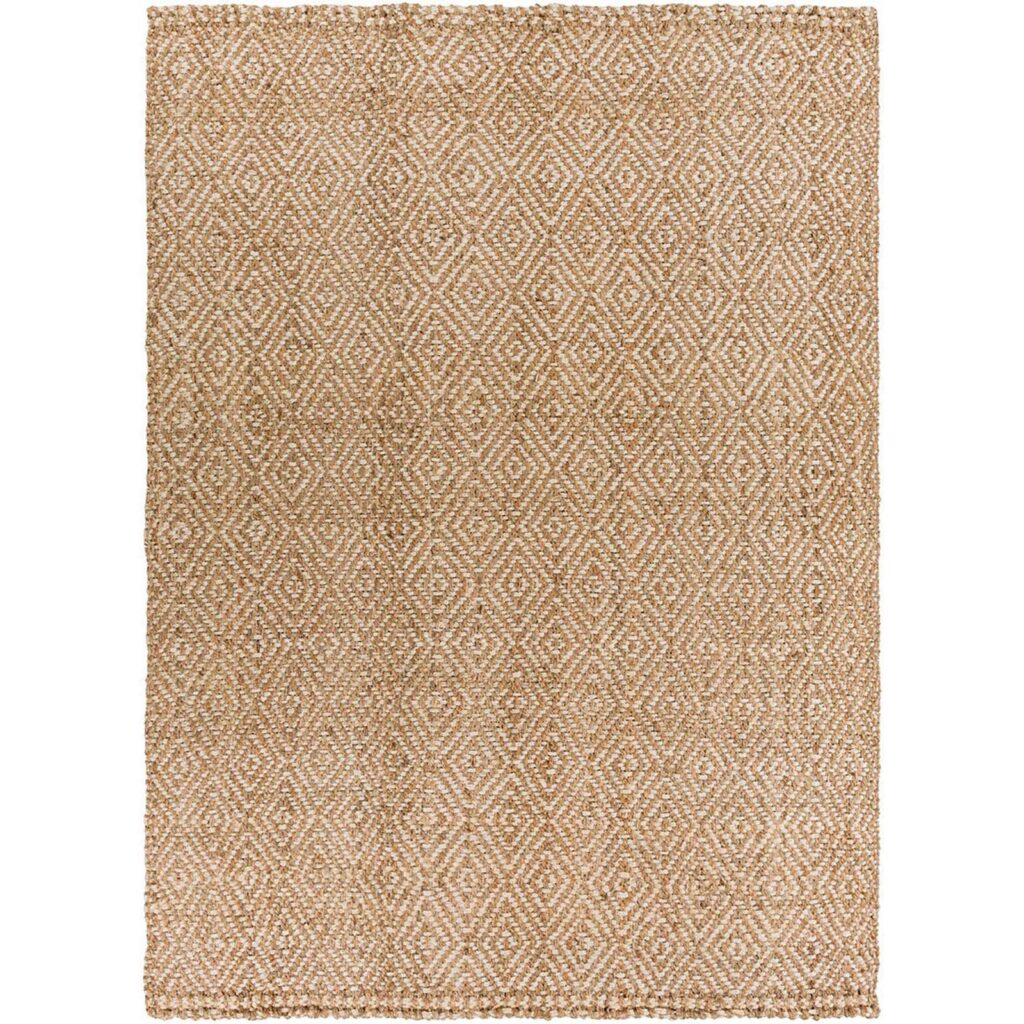 Made of natural fibers? Check. Graphic pattern? Check, though you’ll have to look closer. 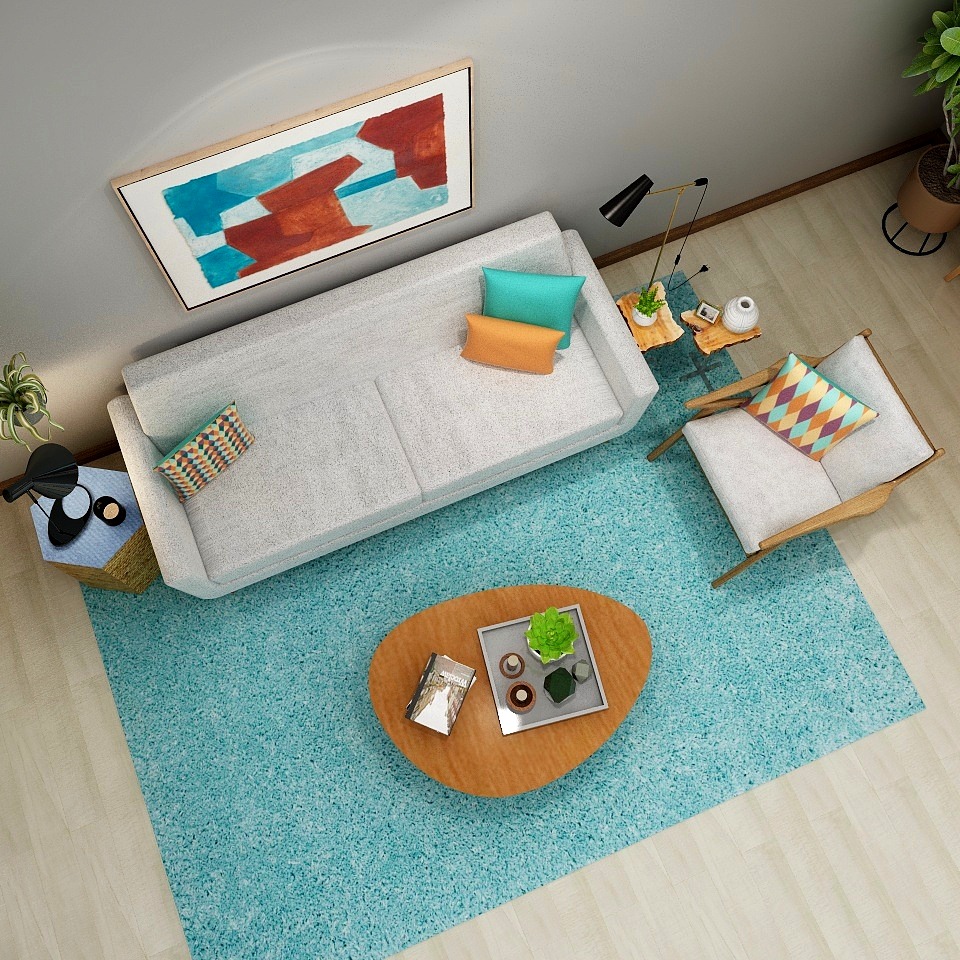 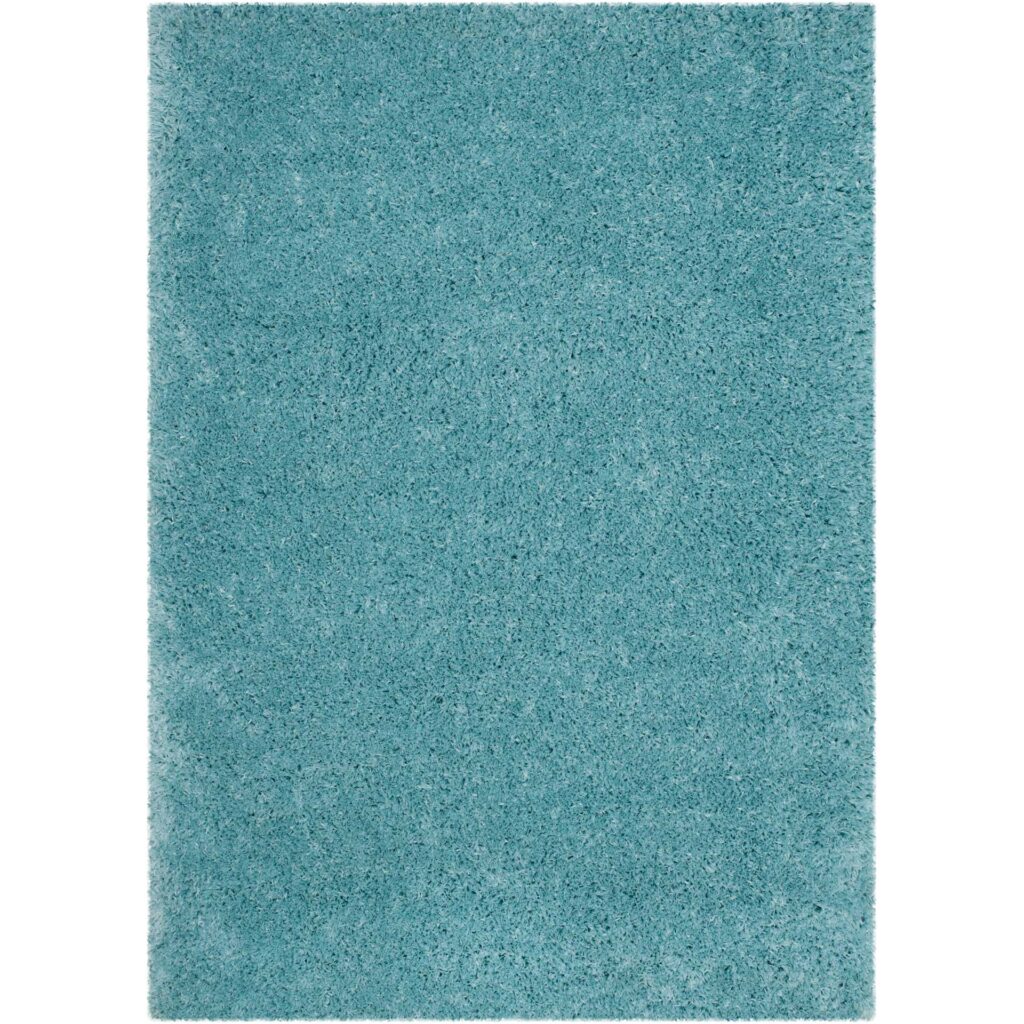 If only for the color, yes. This will blend right in in a Mid-Century Modern space. What about the shag? Why not? After all, one characteristic all modern styles have in common is giving priority to comfort. So that’s another yes.

Here are our other Mid-Century Modern area rug finds

We’ve rounded up some great pieces to inspire you. From vintage to modern; geometric, abstract or psychedelic. There’s a lot here for you to find the one you need. There’s even Space Age- and Atomic Age-inspired pieces below.

Need more ideas for your Mid-Century Modern decorating project? There’s more in our Pinterest board.

Mid-Century Modern Style
Send this to a friend